The largest LVAD trial ever to be performed, led by Dr. Mandeep Mehra published the final analysis of a fully magnetically levitated left ventricular assist device in the New England Journal of Medicine. According to this, among patients with advanced heart failure, a fully magnetically levitated centrifugal- flow pump has been found to be superior to a mechanical-bearing axial-flow pump in advanced heart failure patients in terms of survival free of disabling stroke or reoperation for removal in case of device malfunction.

MOMENTUM 3 is the largest left ventricular assist device randomized control trial ever performed looking at the HeartMate technology in the very difficult space of advanced heart failure. The primary endpoint was a composite of survival at 2 years free of disabling stroke (with disabling stroke indicated by a modified Rankin score of >3) or survival free of reoperation to replace or remove a malfunctioning device. The trial randomized one arm of patients to a traditionally available current device (HeartMate II) which was a continuous flow axial pump with mechanical parts. This made the device prone to wear and tear, with a concerning risk of de novo pump thrombosis. Patients in the second arm received the HeartMate 3 device, a novel device with the unique feature of a fully magnetically levitated rotor. The device was completely frictionless, with no bearings and was not prone to wear and tear. Even if the device fitted into the palm of one’s hand and could be fully implanted into one’s chest, it was engineered to have very wide blood flow paths so red cells entering and exiting the device were not prone to shear stress. So this was a novel platform that was designed to avert pump thrombosis. In addition to this, the HeartMate 3 actually had a fixed pulse algorithm within it, where it revved itself up and down every 2 seconds creating an artificial pulse, while continuous flow devices rendered the individual pulseless. In the past, the transition from pulsatile to non-pulsatile pumps had occurred as pulsatile devices had to be bulky to accommodate displacement chambers and had valves in them that lacked durability. However, when patients were transitioned to non-pulsatile flow, they had inordinately high rates of gastrointestinal bleeding and angiodysplasia of the colon, mimicking a low pulse pressure state seen in critical Aortic stenosis associated with GI bleeding (Heyde’s syndrome). Hence, MOMENTUM 3 was a trial that aimed to reintroduce pulsatile devices, with the HeartMate 3 generating an intrinsic pseudo pulse of 30 bpm. 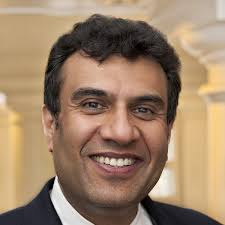 “Till now, we have improved patient survival in advanced HF with LVADs but we haven’t improved the quality of that journey. So patients suffer complications of a stroke, bleeding and pump exchange due to pump thrombosis. We were hoping that the new pump would be more forgiving on endpoints of hemocompatibility related adverse events and we found that the pump durability was robust, stroke rates were halved and bleeding complications including GI bleeds were reduced. In terms of net clinical trial benefit, NNT at 1 year was <1 for averting at least 1 pump thrombosis, or a stroke or bleeding complication. The hope is that with the ‘forgiving’ results, this technology will open the door for much more lenient referral of these patients.”- Dr. Mandeep Mehra, M.D.

Thus, in the final report of the MOMENTUM 3 trial and in the ACC presentation, Mehra et al. demonstrated that the HeartMate 3 fully magnetically levitated centrifugal-flow pump was superior to the HeartMate II axial-flow left ventricular assist system with respect to survival free of disabling stroke or reoperation to replace or remove a malfunctioning device. In addition to reducing the need for pump replacement (mostly for pump thrombosis), the centrifugal-flow pump was associated with a lower incidence of either ischemic or hemorrhagic strokes of any severity and fewer bleeding events. The authors calculated that for every 10 patients who received the centrifugal-flow pump rather than the axial-flow pump, 2.2 pump-thrombosis events, 2 strokes, and 6.8 bleeding events (3.6 gastrointestinal bleeds) were averted over a 2-year period. These findings were accompanied by fewer days spent in the hospital at 2 years among patients who received the magnetically levitated left ventricular assist device. Lastly, in this final analysis involving the full trial population, it was noted that the centrifugal pump was associated with lower rates of bleeding, including gastrointestinal bleeding, which was linked with the unique physiological features of continuous-flow left ventricular assist devices. However, a significant residual risk of bleeding did persist, which was suggestive of the need to investigate whether a reduction in the exposure of patients with these pumps to antiplatelet or anticoagulation therapy would be beneficial.

In a prior interview with Dr. Gibson, the primary investigator, Dr. Mandeep Mehra, medical director of the Brigham and Women’s Hospital (BWH) Heart and Vascular Center had stressed that, “While the HeartMate 3 design has abrogated issues related to pump thrombosis and has led to significant a reduction of stroke (ischemic strokes being more predominant with left ventricular assist devices than hemorrhagic), low-intensity anticoagulation regimens still need to be considered to treat hemorrhagic complications. He had mentioned that “We have finally found a forgiving pump, but not a forgettable pump,” elaborating that this was because “you still have a driveline that exits the abdomen, connects into a battery pack that people harness on their shoulders.” This could be challenging as “there’s always a risk of driveline infections and the patient has to be bound to power sources all the time.” At ACC 2019, in yet another interview with Dr. Gibson, Dr. Mehra remarked, “Till now, we have improved survival in patients with advanced heart failure with LVADs but we haven’t improved the quality of that journey. So these patients really suffer a lot of complications of a stroke, bleeding (particularly GI bleeding). Besides this, many patients return back for pump exchange on account of pump thrombosis. Approximately 10-15% of patients require a second surgery within 1-2 years. We are hoping that the new pump would be more forgiving on endpoints of hemocompatibility related adverse events and that’s what we found! The durability of the pump is robust, stroke rates are halved and bleeding complications including gastrointestinal bleeds are significantly reduced. So gauging the benefit in terms of net clinical trial benefit, NNT at 1 year for HeartMate 3 versus HeartMate 2 was <1 for averting at least 1 pump thrombosis, or a stroke or bleeding complication.”

Presently, HeartMate 3 has been both approved and commercialized for both the short term use and long term duration and destination therapy patients. With its clearly proven superiority, “We believe that it is a clear choice and this technology must replace the previous technology at this time point,” Dr. Mehra emphasizes. “The hope is that with the ‘forgiving’ results, this technology will open the door for much more lenient referral of these patients.” Estimating the impact of this new device, he added, “Presently, about 5000-7000 patients receive LVADs worldwide. The results should open doors to 5 times the number of patients!” When questioned about the next step, he remarks, “The next generation device (HEARTMATE X) will be a fully internalized or fully implantable device where there is no power source that exits the body.” In order to achieve this goal, he believes that free resonance technology has a lot of promise in this field. In addition, novel power sources including hydraulic and thermal power should be considered to internalize these devices. He is also hopeful that future pumps using smart technology will allow the patient to modulate the pulse in response to different activities such as hiking, biking or climbing a flight of stairs.

To view the interview with Dr. C.Michael Gibson, click here.

Post-Hoc Analysis of DAPA-HF: Dapagliflozin Use Is Associated With Rapid Reduction of Cardiovascular Death Among Patients With Heart Failure With Reduced Ejection Fraction

A recent study by Dr. David D. Berg, published in JAMA Cardiology, found that the… END_OF_DOCUMENT_TOKEN_TO_BE_REPLACED